Welcome to Fortunes of War Militaria! 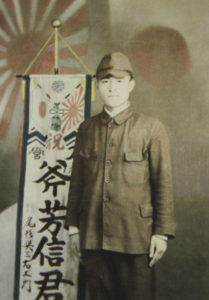 This website is an outgrowth of my interest in the study of Japanese World War Two era military history and of its material culture. More specifically, we present Japanese good luck flags, one-thousand stitch / good luck articles, off-to-war banners and other items that pertain to Japanese World War Two era military send-off celebrations. In addition, we include post-war G. I. souvenir of service flags and other flag related items of the period. 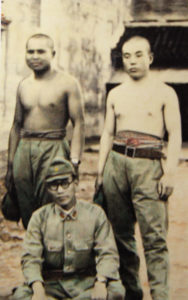 1000 stitch belts (senninbari) grew, I was disappointed by the lack of primary research material available on the subject. That void led me to write the book, Imperial Japanese Good Luck Flags and One-Thousand Stitch Belts, released in 2008 by Schiffer Military Books. The publication’s release caused a burgeoning of interest among a disparate group consisting mainly of military and art historians, textile aficionados and militaria collectors. Following this, inquiries and/or the desire to obtain authentic items started to come to me from all over the world. This site developed as a natural progression in the search, by novice as well as advanced collectors, for genuine items. It is my intention to satisfy all of those goals.

In 2021, Elm Grove Publishing released my latest book, the award winning Battle Carried: Imperial Japanese Tiger Art Good Luck Flags of World War Two. Battle Carried examines the history, meaning and cultural context of tiger imagery as it applied to the decoration of good luck flags. It has proven to be a resource for artists and scholars of Japanese culture, as well as for historians and collectors of flags and Japanese wartime memorabilia.

We donate a minimum of 10% of net sales to this organization. To date, FOWM has donated $2,000.00 to support the National Honor Flight Network. I thank you and so do those who have benefited from your  generous contributions. (The use of this video was granted by permission from Honor Flight  Network.) 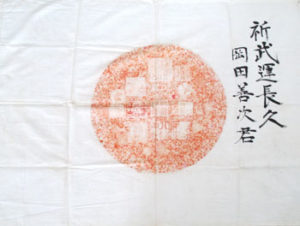 My name is Dr. Michael Bortner. I first became interested in Japanese good luck signed flags more than fifty years ago, when I was in grade school. A passion for flags in general, later developed into a specific interest in finding and then acquiring an authentic, vintage hinomaru yosegaki. As luck would have it, a chance encounter with a dealer at the Orange County Fairgrounds in Southern California, led to that early purchase. My first one-thousand stitch belt or senninbari came a few years later, when I discovered a beautiful tiger stitched example at the old Great Western Show in Pomona, California. I still own both items; each form the center of a collecting passion that burns brightly today.

As my collection of signed flags and senninbari belts developed, so too did my interest in Japanese military send-off culture and customs. After years of study and research, I was led in 2008 to write the book, Imperial Japanese Good Luck Flags and One-Thousand Stitch Belts, (autographed copies available for sale on this website). That 286 page hardcover book along with its numerous illustrations, photos and translations made available for the first time some of the important history and meaning behind the development, fabrication and presentation of the good luck flag and one-thousand stitch belt.

The success of my first book has been met by the 2021 release of my award winning book Battle Carried: Imperial Japanese Tiger Art Good Luck Flags of World War Two. This 196 page hardcover book examines the history, meaning and cultural context of tiger imagery as it applied to the decoration of good luck flags. Through hundreds of extensive color images and detailed close-ups, as well as woodblock prints and rare vintage photographs, this book superbly illustrates some of the rarest and most highly sought after specimens of tiger art flags, many of which are identified to their soldier, sailor and airmen owners.

This website is an outgrowth of the expanding interest in, and the continued study of World War Two era military history and of its material culture. More specifically, we present Japanese good luck signed flags, one-thousand stitch/good luck articles, off-to-war banners and other items that pertained to military send-off celebrations.

I am currently a member of the following research or collector based organizations: The Company of Military Historians, The North American Vexillological Association, Textile Society of America, The Society For Military History, The Ohio Valley Military Society and the MAX Certified Dealer Program.