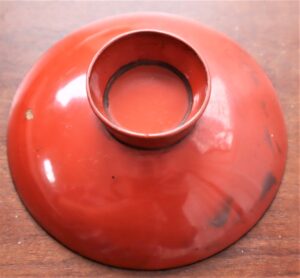 This Japanese Lacquer Ware Sake Cup measures approximately 3.25″ inches from rim to rim. The center design depicts a Japanese koi or goldfish.  The goldfish was one of the emblems displayed during Boy’s Day celebrations. As a symbol, it also took the form of koinobori or carp banners. Every boy in a family was presented with a carp banner. The oldest son would have the largest banner, flying at the top, and each subsequent son’s banner would be made smaller and of a different color.  During the celebration, the banners would be flown on a flagpole at the family home. In 1948 the holiday was changed to Children’s Day in order to honor both boys and girls (and fathers and mothers), at the same time.  The carp was seen as a symbol of strength; that quality was highly prized, especially in men. It was hoped that boys would acquire this same trait as they grew up. A cup with a wonderful history.  One small chip in the lacquer.